Analysis of higher education staff data provides insights into how university workforces are evolving to ensure student achievement and satisfaction, as well as research and teaching excellence, says Amy Norton of Hefce.

The annual analysis of the HESA individualised staff record is well under way at HEFCE. Each year our analysts crunch through hundreds of thousands of records to publish statistics which shed light on the 410,000 people working in English higher education institutions. This number includes staff on ‘atypical’ contracts – more on those in a moment.

The headlines from HESA’s First Statistical Release (published just before Christmas) tell us that staff numbers are all up slightly in 2013-14, which continues the upward trend we’ve seen over the past few years. There may be a more marked increase in academic numbers but we need to investigate this more closely before we can say this for sure. We also know that the numbers of professors increased last year (up 7% on the previous year to over 19,000).

Turning to the most recent data we have fully analysed (i.e. from the 2012-13 HESA record), we know that there has been a considerable increase in the numbers of academic staff over the past ten years – an extra 21,000 since 2003-04 (and that’s not including the atypicals), bringing their total to 126,000. Professional and support (P&S) staff have increased also in this period, but at a slower rate (an extra 11,645 bringing their total to over 149,000). And all this in the context of a 26% increase in student numbers over the same period.

Redundancy rates, which are generally very low for 2012-13, are slightly higher for professional and support staff than they are for academics (1.2% of P&S staff were made redundant in this year compared with 1% of academic staff). This figure is borne out by the 2013 HE Workforce Survey which showed that HEIs made an average of 25 P&S staff reductions compared with an average reduction of 18 academics.

This isn’t particularly surprising, given the pressure HEIs are facing with increased student numbers, and their desire to continually enhance teaching quality and protect staff-to-student ratios.

Workforce flexibility and agility is constantly being emphasised for the sector, as the changes to student fees, recruitment and increased competition has created volatility for HEIs. One way of creating more flexibility is to employ more flexible people on more flexible contracts.

Incidentally, I’m not talking about ‘zero hours’ contracts here, or reforms to the post-92 contract – both of which could be blog post topics for another day – but those very low FTE ‘atypical’ contracts which (according to the HESA definition) ‘may be characterised by a high degree of flexibility for both the work provider and the working person’.

While the numbers are substantial (69,000 academic atypicals in 2012-13), these have actually reduced over the past five years by more than 10,500. Is this perhaps an area in which HEIs are cutting back? Or does it reflect a renewed focus on the student experience which is provoking fewer fractional or hourly paid contract staff?

What we do know is that student satisfaction has been steadily rising, from the high baseline it started out at of 80% overall satisfaction in 2005, to 86% in 2014.  Evidence from the National Student Survey supports the argument that institutions have been making significant improvements to the student experience. Our recent analysis of NSS results (2005–2013) found that satisfaction with ‘assessment and feedback’ (59 to 71%) and ‘academic support’ (68 to 80%) had improved by the most significant margins. While this suggests that there is still room for improvement, it does paint a picture of a sector placing greater emphasis on the student experience.

The public interest in an efficient and effective HE workforce stems from the clear and tangible benefits to the UK of an internationally excellent HE sector, rich in world class research and a global destination of choice for students second only to the USA. The chart below shows that 55% of the sector’s total expenditure (a massive £27.9bn) is spent on staff costs (£15.4bn). 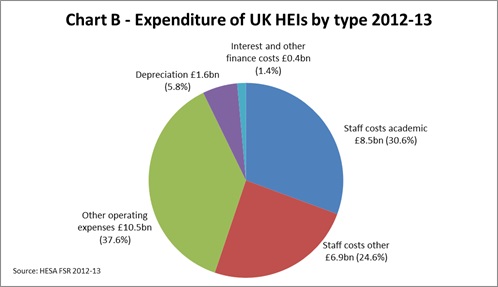 How these staff resources are led, managed and deployed, as well as their efficiency and effectiveness, is the subject of the workforce chapter of the forthcoming ‘Efficiency Report’ by Universities UK. HEFCE will support the implementation of that report by continually developing our approach to benchmarking, evidencing and measuring efficiency – wherever it can be found across the sector.

Our workforce metrics will be important for spotting trends and understanding better the evolving profile of the workforce, and correlating that to the sector’s outcomes (student achievement and satisfaction, research and teaching excellence).

Amy Norton is a senior HE policy adviser at HEFCE

How can we tackle procurement skills shortages in higher education?

How to create a lean team