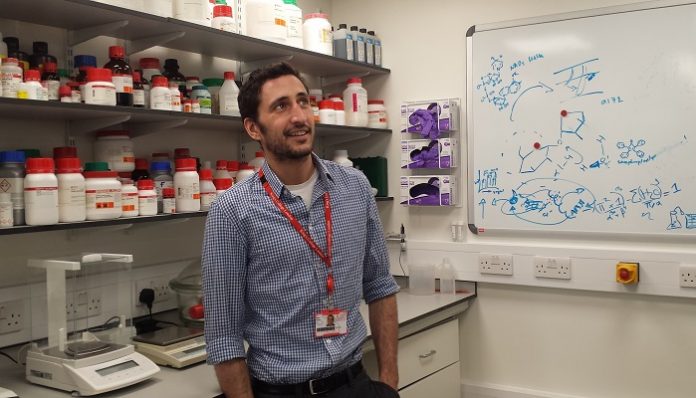 Straddling the disciplines of facilities management and scientific research support, the sustainable labs co-ordinator is an emerging role in universities. Rosie Niven meets Martin Farley, who became the first such appointment in the UK when he was hired by the University of Edinburgh and has since moved to King’s College London to take on a similar role.

My role at KCL is to improve the sustainability and efficiency of research and laboratories. This is quite broad as it can mean working in ventilation, equipment, staff engagement, cold storage, procurement, chemical management and many more elements and opportunities to maximise sustainability. My work should never harm the science, but rather aims to improve it.

The most significant cost depends on the lab type, but they’re usually ventilation, equipment, and – this is often under-looked – people. If you step back from the lab itself, the buildings housing the research, ventilation included, can be very costly.

If the goal is to bottom line reduce lab costs, then I’d say the best method is targeted projects combined with user engagement. Ventilation projects are well known, but here’s lots of potential in cold storage management, equipment, chemical/gas management, and more. You need the users to see their engagement is a part of something and the projects rarely sustain their benefits if staff/students aren’t engaged. It’s worth noting that lab sustainability projects can have positive outcomes beyond cost for e.g. better working environment, or improved resilience.

I definitely hope universities will appoint more roles similar to the one we created in Edinburgh and has now been replicated at Strathclyde, Bristol and KCL. Once established, these positions definitely pay for themselves several fold, though there is a bit of a steep learning curve.

A background in science has really helped me, but I’ve had to learn on the go as well. This role combines science with design, architecture, mechanical/electrical engineering, staff engagement, university processes and more.

In my last talk I raised ‘questioning norms in science’ because it keeps coming up for me again and again.

The cold-storage study I set up at the University of Edinburgh was investigating why we use -80C instead of -70C to store samples, as -70C used to be the norm and saves 28% in electricity. -80C seems to have been set by manufacturers rather than based in any science and yet now is the norm!

We find plenty of these ‘norms’ as we dig deeper, which is surprising as we always assume science has had all its processes validated through testing. When we approach science with a bit of a child’s mind we can ask the questions that may lead to more efficient research. Like how many air changes are necessary for a safe environment? Or why do we still build so many walk-in cold rooms?

I started in the sciences and worked as a lab technician in the US as well as an extended research period in the Netherlands (I did my Masters at Leiden University). I did a minor in something the Dutch call science-based business, which led to an internship at the University of Edinburgh to start this off – thanks to S-Lab, Allen Doyle, the Scottish Funding Council, and their SRS dept. The internship quickly highlighted the potential of the role and it’s been a busy three years since!

Up until this week, I was working with S-Lab closely to audit and engage with universities around London. I did audits for quite a few labs/buildings like the Sir Alex Fleming Building at Imperial, and highlighted how they could improve their cold storage and equipment management in particular, along with  introducing sustainable inductions/exit-policies.

More universities wanted me to audit them outside of London, so I’ve set up my own company to allow me to take on this work. I’ve done a few jobs now under the guise of ‘Green Lab Associates’ and despite the change of methods, when you become an outside consultant, people seem to pay more attention to a report they paid for than a free one!