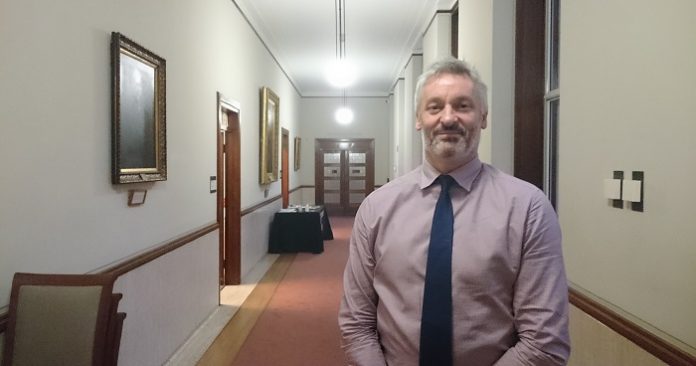 The University of Northampton is undergoing many changes ahead of the move to the Waterside campus in 2018. Vice chancellor, Professor Nick Petford, tells Efficiency Exchange about his role in the change and draws some surprising parallels between his academic specialism of volcanology and the higher education environment.

Like any university we have to keep a close eye on running the organisation in a cost effective way. This is because as a business, the lower our running costs for estates, heating, facilities and staff, the more we have left over to reinvest.  And as an exempt charity, the more we have to do good work. This includes our commitment to sustainability so I was pleased when this year we won a Green Green Star Award through Investors in Environment for a 500% increase in recycling food waste and glass, a 17% decrease in water usage and 15% decrease in gas usage. We have sent zero waste to landfill for the fourth year in a row.

Looking forward to our new Waterside Campus relocation project, our space utilisation, combined with our below sector average staff costs will make us one of the most efficient and effective universities in the UK following HEFCE metrics in this area. This sounds boring but what it means is surplus cash to invest in things we want to do, notably around social impact, that help fulfil our mission.

It’s great. I’ve been open plan and hot desking for 15 months now. We have a shared workspace that is technically the Office of the Vice Chancellor but also includes visitors and contractors working on the Waterside project. When I joined we had a typical set-up, PAs with offices and me locked behind a double set of doors. We did a space audit that showed my annual space utilisation – in English, how long I spend in my office – was less than 40% of the year, similar in fact to many of our academic staff. The office was just a status symbol. So we got rid of it. Not just me, the chief operating officer, head of student services – Registrar in old money – and dean of the student experience.

The biggest improvement in terms of efficiency and effectiveness is that instead scheduling meetings and sending emails we can just talk to each other in the same room. It means that decision making is much quicker. We’ve also reduced the number of committees and other forms of bureaucracy to this end. In short it’s liberating. Everyone should do it!

You can spend a lot of time trying to change culture through dialogue. While important, what really changes culture is the introduction of new business models or processes.  A quote by the architect Buckminster Fuller sums this up nicely. He said: “you never change things by fighting the existing reality. To change something, build a new model which makes the existing one obsolete.” This is the philosophy behind our move to Waterside. Part of it involves a new and exciting blended learning and teaching model supplemented by digital technology. The university will revolve around a learning commons with extensive break-out space for small group learning with less focus on large lecture halls. There won’t be formal faculties or academic departments. Face to face contact time is a critical element of the model, along with flipped classrooms and active learning. This involves new ways of working, not just for academic staff, who like me, will be hot desking, but also our students. It probably won’t be for everyone.

4. You are chair of Procurement UK, how much of a role has procurement played in the efficiency agenda and can it contribute any more to savings?

In short, yes. Procurement UK (PUK) was set up in 2013 on the back of the first Diamond Review as a strategic group to help raise the profile of procurement and meet a target of 30% collaborative non pay spend across England by 2016.

We were set up at a time of recession, falling government investment and the lifting of the student number cap. From a political point of view it was clear we had to show the sector was taking positive action to improve efficiencies in the industry.

As a sector we control around £10bn worth of purchasing pounds annually, the second largest part of a university’s budget after pay. So it’s a very important but still a poorly understood function outside the world of procurement professionals. But we have had some significant success in the past few years.

We helped set up the Higher Education Procurement Association as a training ground and ideas exchange for procurement staff, reinstated the Efficiency Measurement Model (EMM) reporting measurement to help evidence savings, established Procurement England Ltd as an operational arm of PUK and rolled out a programme of Procurement Maturity Assessments. So far 96 HEIs have participated and we are seeing real improvements against baseline measurements.

I would argue that Scotland has had even more success, with the APUC leading the way especially in the area of social procurement and public reform. Procurement has an important role to play in promoting the values of universities and their missions, and even the student experience. At Northampton we have a social value levy in our tender process where bidders have to show how they will add social good as well as low price. This could involve apprentices, working with NEETS, or offering placements for our students. We also look to buy from local SMEs who are social enterprises or delivering sustainable practice. This ties in with the UK Social Values Act, something as a university we are keen to promote.

Procurement also crosses over into shared services. How do we work more closely with research councils and funders so that when universities buy expensive laboratory kit it is where possible shared, both within the institution and externally? There is some good practice in this area, for example the work done by the N8 Group.

Earlier this week, I tweeted about how in the US there is a move to bring together all the facilities for rock deformation as a shared service nationally. This is a great opportunity to combine people with different skillsets in experimentation, theory, modelling and field work, all coalescing around the idea of sharing resource and expertise.

The jokey answer is disaster management. More fundamental is the idea of perturbations and shocks to the status quo. In the natural world you know from the environmental record that unexpected and even catastrophic events can happen quickly. So how you forecast and prepare for them in advance has real practical relevance. Dealing with, and where possible quantifying uncertainty can mean the difference between life and death. Despite what some might think, universities don’t face quite the same level of challenge. However, techniques developed to analyse risk, in particular extreme events – or Black Swans – are something university managers and boards could learn from.

It’s fair to say universities are suffering external shocks too, but ones that are man-made. And the language used to describe them is geological. We are living in a VUCA world – Volatile, Uncertain Complex and Ambiguous. Politicians and journalists borrow phrases such as fault lines, earthquakes, eruptions and seismic shifts, as devices for rhetorical or literary impact to describe this new normal, often without knowing their true meaning.

I am not particularly highbrow so I mostly watch television. I particularly enjoy weekend shopping with my wife and daughters which involves me driving to retail outlets where they buy clothes only to return them the following week.