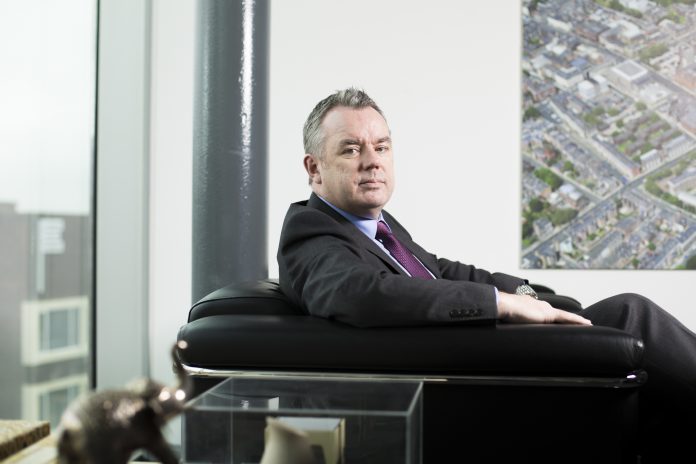 The University of Liverpool’s deputy vice chancellor Patrick Hackett tells Efficiency Exchange how change is part of the role of every member of staff and describes the institution’s strategy for the next 10 years.

1.  What are the biggest efficiency challenges at Liverpool?

We are a complex organisation with a broad range of subject areas, particularly given our relatively small size, so I would say the biggest challenge is generating the right level of surplus to reinvest in our activities to ensure long term success and sustainability. There are still opportunities to be much more efficient and more business-like in the way we deliver our activities.

We have three faculties, 16 schools and quite a significant level of devolution of decision making and investment through that organisational structure. That’s good on the one hand because it puts decision making at the right level but it is also a challenge when you want to deliver cross-institutional initiatives, particularly around efficiency and effectiveness.

2.  You are responsible for a significant change management process following changes in the way higher education is funded in the UK. Can you tell me more about that?

Change management is part of the norm for us. I came to Liverpool in 2005 and embarked on change then and we’ve not stopped. The world in which we are operating has changed significantly, and I think we, just like the rest of the sector, are responding to those external changes.

For me, change management is about continuous improvement and our approach up until we launched our new strategy this year was to carry out the change programme as part of normal business. We have done that partly because we looked around what others had done; some institutions created a dedicated change team, for example.

We looked at that option but chose not to do it because we were concerned that sometimes other people around the university think change is “not our responsibility”, but the responsibility of the specialist team. We wanted everybody to feel that they themselves are responsible for leading and delivering change.

We particularly took that approach with value for money. We’ve had interesting discussions with HEFCE and our internal auditors over the years who ask us why we hadn’t got a value for money committee. We have resisted – value for money is part of everything we do. If we have a paper coming through the system on a project or a policy, one of the requirements is to look at the value for money opportunities and that has done a lot to win hearts and minds.

We’ve just launched our strategy 2026 and there are some very ambitious targets in there, for example to get into the top 100 universities in the world by 2026. To deliver on this will require a transformation in what we do. The speed in which we need to deliver that transformation means that we will create a small, dedicated, change management team. The people will not work on their own to deliver change but facilitate other teams of colleagues from around the institution who will be brought together to deliver the change programme.

We have created a change board at governance level to oversee the programme because we recognise that one of our challenges is if we take on too much change at one time. So we’ll have a slightly different approach to delivering change in the next five years.

3.   What are your biggest success stories at Liverpool in terms of efficiency?

We had one of the oldest combined heat and power (CHP) project in universities. It was unique at the time because it had a jet engine. Over a period of five years, we replaced it and installed distributed heat facilities around the campus. Now we have most of the campus covered by the CHP, which is very efficient and very environmentally friendly.

In our health and life sciences faculty, where we have a range of clinical subjects and research areas, we created a technology directorate. This is an organisational unit that took responsibility for all of our research facilities in the faculty. They have streamlined access to those facilities, professionalising the way in which we identify and procure equipment and make them available to academic colleagues around the institution. It has been a very successful process.

Our academic colleagues are very pleased with the project. They’ve created a voucher scheme, which individual colleagues around the institution can bid for to secure access to the facilities to conduct research projects.

We introduced a managed print service across the institution, which was pretty controversial at the time because we took away everybody’s printer. That’s saved four million pages from being printed a year that would have otherwise been printed, which represents annual savings of around £150,000.

There have been other things like lecture capture. Our computer services department created in-house software to enable individual academic colleagues to record their lectures and then students can access those lectures offline at their own convenience. That’s improved the effectiveness of what we do rather than delivering cost savings, but we did develop it in house so it is cheaper than buying something in.

At first we had a lot of resistance from academic colleagues who didn’t like having their lectures recorded for posterity. But now that it is up and running, people are seeing the benefits and we are getting really positive feedback from students and staff.

4.   Your previous role at Liverpool was chief operating officer (COO). Do you think the role of COO role differs from that of the traditional registrar?

I am deputy vice chancellor (DVC), and I am chief operating officer as well. In some ways the DVC title reinforces the point I am going to make, which is that universities have to be more business-like in the way in which they operate. That is not to say they are businesses or they are anything like private sector operators.

We have a mission that goes way beyond simply driving profit for shareholders, but having said that, the way that universities have operated traditionally is no longer fit for purpose. We are, whether we like it or not, operating in a much more competitive environment, particularly universities like ours that compete in a global marketplace.

It used to be controversial and some colleagues didn’t like me saying this, but if you distil my role down to the traditional registrar or somebody who worked their way up a career path through administrative support ultimately to become a registrar through time served, that type of professional leader is no longer appropriate for universities. The COO role is much more business-focused, whilst maintaining the academic standards and qualities that are the key to our reputation and our success.

We also need business-focused skills around commercial activities and around the ways we conduct our business, in other words, everything we are talking about around efficiency and effectiveness, finding new ways of doing things and generating increased surpluses for reinvesting in our people and facilities.

The old days when the government handed out capital grants to universities have gone and universities need to understand how they put in place strategies and implementation plans to ensure their long term sustainability. That requires a different type of skillset and experience and that’s what I believe the COO role is about.

In our new Strategy 2026 there are three strands: research and impact, education and professional services. There is a debate about whether non-academic colleagues in universities are there just to support academic colleagues or whether they do more than support them, for example providing leadership, influence, direction, skills and experience. Working in partnership with academic colleagues has produced our strategy for the future and provides a greater chance of long term sustainability and long term success.

5.  You are an architect by profession – which transferable skills from that background are useful in your current role?

There are obvious things like skillsets around project management, how to put a plan together, how to set a strategy, how to create a delivery plan and how to see it through to execution. You can get those from other professions too, but from my perspective they have played an important part in how my career has panned out.

I went from being an architect to being a project manager at Royal Holloway in London which I had only planned to do for a short time, but I was then promoted to run a small section in the estates department and over time, both before and after my move to Liverpool, increasingly took on responsibility for non-estates-related activity. Architectural training about professionalism was also very important.

I have a daughter who is 20 and about to start her third year studying architecture at the University of Nottingham and twin seven year old boys, so they take up a lot of my spare time.

I like sport, I’ll watch anything – I am particularly keen on Rugby Union. I do like home DIY, maybe that’s the architect in me. We got back from holiday on Wednesday and I spent four days of the bank holiday sanding timber floors in the house so my back was broke when I came back to work – but it did give me great pleasure.

I also like reading in my spare time. I am currently reading Winter in Madrid by CJ Sansom and have just finished reading the Fifth Gospel by Ian Caldwell.