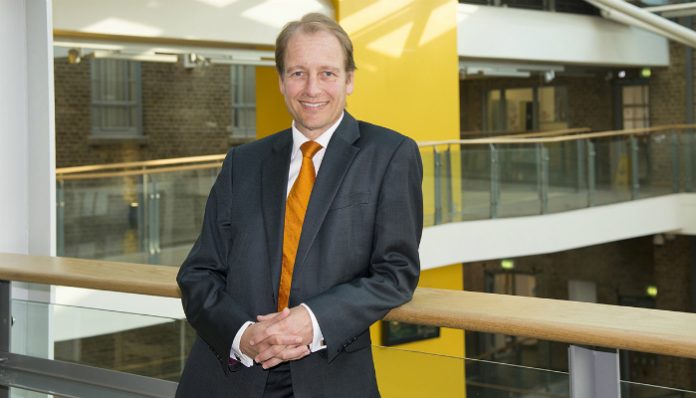 Proud to be strongly involved with the UN’s gender equality campaign and encouraging wider HE participation through philanthropy, Professor Paul Boyle, vice-chancellor of the University of Leicester is nothing if not dynamic. If that’s not enough to keep him busy, he tells Efficiency Exchange why he’d like to take on one of the toughest jobs in government – if only for 24 hours.

1. You’ve recently been elected to the board of the European University Association. With such a challenging time ahead for the sector in the wake of the Brexit vote, how are you hoping to use that position to get the best deal for universities?

With Brexit, it’s increasingly important for UK universities to maintain a voice in Europe. Universities are embedded in the EU in many ways, including through research partnerships and the Erasmus programme, and the benefits these bring cannot be easily replicated. Careful thought needs to be given to how we’re going to continue those relationships. I think my election to the EUA is a fantastic opportunity for the UK. First, because it gives us a voice in Europe, and, second, it’s a chance for Europe to engage with us.

The fact that a candidate from the UK was voted onto the board is a strong statement from the universities spread across Europe that they want to maintain a relationship with the UK and that they value the contribution we can bring. The EUA is a particularly important organisation at the current time, as it has the ability to bring together the voices of over 850 universities to speak as one about issues like university autonomy and academic freedom.

2. You are an “impact champion” for the UN’s HeForShe movement. Can you tell us what the movement’s aim is and what your role involves?

I am passionate about advancing gender equality and have conducted research in this area. As gender imbalance remains a significant issue in HEIs, I’m keen for Leicester to lead the way in tackling this most fundamental of human rights issues.

At Leicester we have strong retention rates and high graduate employability rates, which show the quality of our provision.

We’re very proud to be strongly associated with the HeForShe movement. Its focus is to encourage men to engage more with the issue of gender equality. In universities, women have historically been relied upon to make the case for equality – they tend to dominate on equality committees, for example. The UN’s IMPACT 10x10x10 programme brings ten national leaders, ten CEOs of global multinationals and ten universities from across the world together to take the lead in identifying and implementing new approaches. We know that while women make up roughly half of lecturers in universities, there are only around 23% of professorial posts held by women, so we have to improve that. We’ve identified three areas where we want substantial change:

But we’ve also done things to help achieve these objectives for example, we’ve recently appointed our first DPVC role for equality. We’ve introduced compulsory training modules; changed our promotions processes; and trained our teams in recognising unconscious bias. We also draw attention to the problems that women have in putting themselves forward, encouraging heads of department to work with women to nominate themselves for promotion. Finally, we’ve brought in an external agency to check for pay discrepancies between men and women.

Clearly, this is a subject close to my heart and our status as worldwide champions of the HeForShe movement is both a great privilege and a huge responsibility. We’ve been vested with the challenge of making transformational advances in gender equality and being a beacon for the rest of the world. We aim to deliver fundamental change within a generation, so that organisations such as HeForShe become redundant and my two daughters and two sons take it for granted that they’ll be judged on their merits – not their gender.

3. There is an onus on institutions to show they provide value for money. What do you think that means and how is Leicester demonstrating that to its students?

Talking about value for money is not as simple as it might seem. We’ve had significant changes in UK education, with students taking on the bulk of the cost of a university education, so institutions have to show they provide excellent value for money.

Students are at the heart of everything we do. The quality of our estate, the facilities and services we provide, the excellence of our education and what is described as ‘the student experience’ are all hallmarks of how a university offers value for money. At Leicester we have strong retention rates and high graduate employability rates, which show the quality of our provision. But we need to do a better job of showing that the education and research we provide are the very best. We also need to be able to demonstrate that our processes are as efficient and as up to date that they can be. I think this is what not only Leicester but all UK universities are keen to do.

4. Can you give us an example of how Leicester has implemented Professor Sir Ian Diamond’s efficiency and effectiveness recommendations?

Ian’s review was welcomed, but we would argue that we’ve tried to be as efficient as possible across the piece anyway. For example, we are very proud of our procurement at this university, and are pleased that we are beating NAO targets comfortably. Our estate is becoming increasingly efficient, as we’re making sure our carbon footprint is diminishing. We’ve just completed the UK’s largest Passivhaus building which will house our new Centre for Medicine. And we’re also focusing on data. We’re rapidly improving our underlying data structures which will make us an easier and less bureaucratic place to work and study, but will also provide us with the foundation for powerful data analytics.

Data improvements can be costly and for many the differences may not be obvious immediately, but it’s an increasingly important part of our digital strategy.

5. How has the higher education sector changed between your graduation in 1986 and now?

There would be some who would say that the amount of change in HE has been relatively small – the fundamentals haven’t changed for centuries. But in fact, that really isn’t true as there’s been huge change in many areas. Universities have transformed in a generation. Students are at the heart of change. Careers development at the University of Leicester, for example, is not just about helping students and graduates to get their first job – it’s about equipping them with skills for a lifetime of professional opportunities in an ever-changing world.

We’re also becoming more digital, which you can see through the emergence of MOOCs and the way we deliver our lectures. Clearly, the change to the fees structure means that students view university differently now to when I graduated. Also, universities are more likely to work together and with organisations in the private, public and third sectors.

And philanthropy has become far more important. We’ve just brought in a foundation year for our medical programme, targeting students from poorer backgrounds. They’ll train with us for a year to get them to a level where they can access our medical programme and we’re working with schools to attract students with the right aptitude but who may not have had the support they needed to meet our stringent entry standards. Our aim is that children will enter our programme who would never have imagined a medical career in the past. All of this has been made possible through philanthropy.

6. Which of your achievements at Leicester are you most proud of and why?

One of the first things we did when I arrived, was to develop a new strategic plan and I’m very pleased with how that went. We launched a ‘strategic conversation’ and spoke to thousands of people on and off campus, in the city and beyond. It helped us identify both our strengths and our weaknesses. And the proof of the pudding is that we still see the plan being used by academic and professional service departments now.

There are many other things to be proud of too. I’m really pleased that we’ve launched our first campus in China in partnership with the Dalian University of Technology. And working with Leicester City Council and the Leicester and Leicestershire Enterprise Partnership, we have also received government support to establish a space-related science park in the city next door to the national space centre which was originally located in the city because of the university’s 50 year history of leading space research. This will bring together researchers and students with businesses interested in space and space exploitation. We believe this will have an enormous impact on the city of Leicester.

7. If you could swap jobs with anyone for a day, who would it be and why?

Two people come to mind. One of them is the home secretary – I’d like the home office to think more carefully about students and immigration, so it would be interesting to be able to influence this policy for a day.

The other one would be Mick McCarthy, because I would love to manage Ipswich Town for a day.