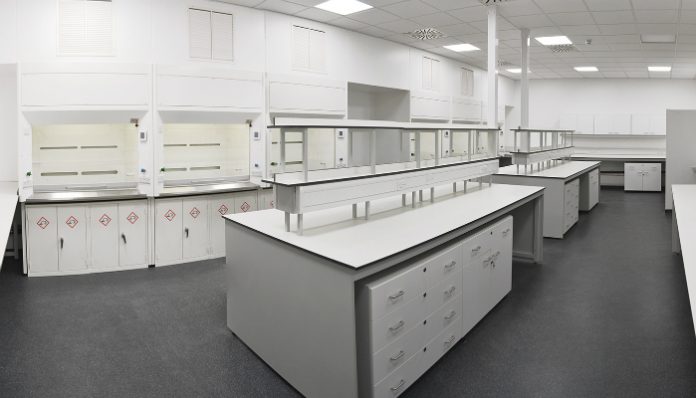 Unit DX opens its doors this month in the centre of Bristol, providing evidence of how universities’ expertise is benefiting local economies. Created to solve an infrastructure problem which has led to the loss of scientific start-ups from the area, Unit DX went from idea to operational laboratory facility in 22 months. Director Harry Destecroix explains how.

While finishing my PhD at the University of Bristol in 2015, I decided to set up my own company, Ziylo, to commercialise research from Anthony Davis’s research group, focusing on a sugar sensing technology which could have a range of potential applications including diabetes management.

We wanted to stay in the Bristol area and were fortunate to find space in the university’s chemistry department. However, this was only a short-term solution, as the university needed to house its own researchers, and we needed room to grow.

Bristol science start-ups were moving out

Around this time the question arose, why was there nowhere for young science companies to move into? And what has been happening to the companies from the local area who need lab space and business support to get their start-ups off the ground?

Bristol has recently been voted the most liveable city in the UK, and the area contains three world-class universities, including the University of Bristol which is ranked in the top five UK universities for research output. For these reasons we felt that Bristol should have a place for scientific entrepreneurs to set up.

Our ethos is ‘designed by scientists, for scientists’.

We identified the answer to our question: there was an infrastructure problem in the area, including a lack of readily available laboratory space and science focused business support.

Frustrated by the lack of facilities, and unable to afford to build their own at such an early stage, small science companies were moving to more established scientific centres in ‘the golden triangle’ of Oxford, Cambridge, London, or even abroad. They had little choice but to leave the area.

This is when the idea was formed to build our own facility offering rentable laboratory space and business support tailored to scientists.

Having been through the exceptional incubation programmes at SETsquared, we realised the value of mentoring and advice at the early stages of setting up a business. The problem remained however, that tech and digital companies do not require the immediate access to expensive facilities and equipment that a science start-up needs in its early days.

We spoke to our network of investors gained through starting Ziylo, who were very keen on the idea, and we raised the capital required to set up what we believe to be the first independent scientific incubation centre in the UK.

“Unit DX is in itself a lean start-up.”

What was unique about the process which brought Unit DX about was our approach to setting up the facility. This was achieved through our novel approach to the process, as Unit DX is in itself a lean start-up. With only a small team, we were heavily involved in the design and procurement aspects of the build, which allowed us to look very closely at the options available at each stage and critically evaluate the value of every detail of the design. By hiring an in-house architectural designer, we were able to design much of the building ourselves, and carefully cost each area individually. Our ethos is ‘designed by scientists, for scientists’.

The result was the dramatically reduced cost and timescales associated with the construction and creation of the building, in comparison with other similar offerings.

As we now have a fully operational facility, with Ziylo and other tenants moving in, we are in the process of setting up partnerships and collaborations with the industrial and research community to ensure our tenants have access to a network of contacts and support. To address this, we have set up a consultancy firm, Bristol Consulting Partnership, which will provide scientific, design and management support for SME’s, directly linking people with specialist academic skillsets to the enterprises at Unit DX. This will allow us to disseminate knowledge from local universities and integrate this into the support we are offering to start-ups, widening access to the high-calibre research from these institutions.

Along with this, we have created a service called the Instrument Link, which will allow our tenants access to a wide range of scientific instrumentation at the Universities of Bristol and Bath. This means that the universities reduce unused time on their equipment and bring in revenue during times when it would otherwise be unused.

We have also been developing outreach programmes to introduce local children to science. During our first week, we held an open day for 120 kids from inner-city schools. We want to use our position to encourage kids to consider science as a career choice and to show them that it can be engaging and exciting.

The drive behind the project was to provide Bristol and Bath’s scientific entrepreneurs with a place to go and the reaction from the academic and business community has been incredible. We do encourage anyone with an interest in the project to get in touch as we are highly collaborative and would love to hear from you.

Reproducibility in Research – How it relates to Sustainability and Green Labs